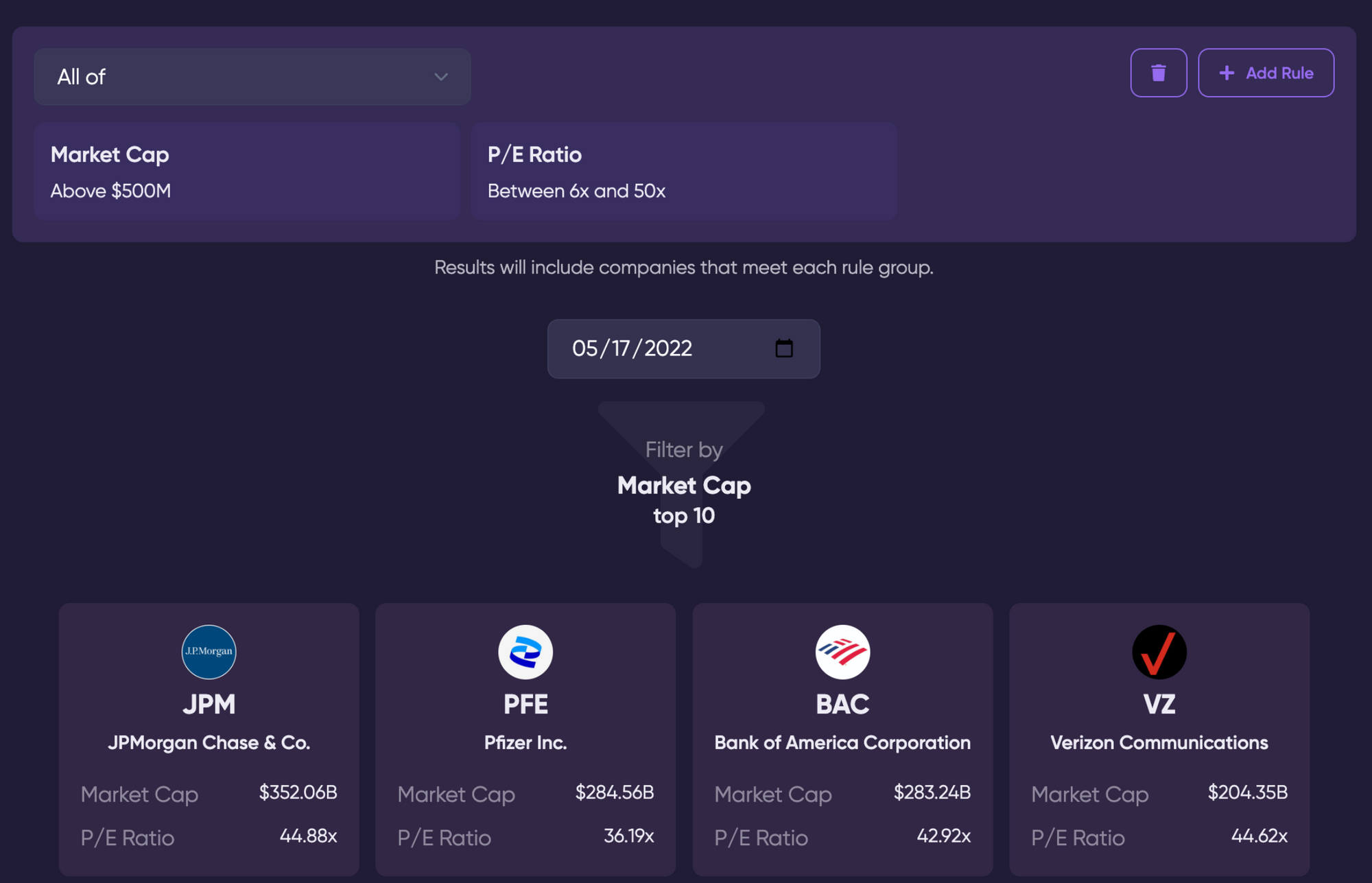 Welcome back to another episode of… Dev Updates!!! We hope everyone had a lovely Memorial Day. As Pluto plugs away at its core feature set, we’re overwhelmingly proud to introduce yet another major piece to the puzzle. Screeners! For those who don’t know what that is or get excited at the drop of an exclamation mark, here’s a quick summary. Screeners are how anyone can go beyond simply picking stocks and assets by name, allowing them to search for said assets via a user-customizable rule set. For any user that knows what they want to star in their portfolio, as well as why they want it, this is an incredibly powerful tool allows them to find similar assets per parameter and plug them into a strategy with advanced user-defined filters. And it’s about to become a landmark selling point for Pluto.

Currently, screeners are an important, but mostly separate tool from our competitors. And they look like this.

What is a new user supposed to gleam from any of this? We’ve seen this feature be implemented by other websites, admirably so, but it’s often cluttered and completely undefined for novice traders and investors. In the case above, it sure is functional, if you have the finance equivalent of a Rosetta Stone handy. Pluto’s big vision for the future is one where people of all skill levels have a one stop shop which makes no compromises and leaves no base of users behind. Screeners as we see them have been a poorly designed mess without a semblance of proper communication behind their power. And that’s where Pluto is poised to step in and make a huge splash.

into this. A massive simplification right off the bat, one that is intended to guide our users towards making active choices as opposed to getting lost in the weeds. And staying on the subject of not getting lost, why don’t we quickly go over how to make them in Pluto?

Step 2: Look to your strategies tab, select “My Parts,” and add a screener.

Step 3: Start testing! This step is totally free-form. Your success metrics are your own, and the assets you’re looking for reveal themselves based on what you say. But let’s go over some examples. Say you want to look up stocks that have a market cap above $150 million and below $1 billion, that are seeing large losses but which just had a market opening that’s rising. You can see it. Or you want to see a company that’s issued millions of shares and is valued at under 5 dollars. You can see those too. Even more complex and varied queries can be performed, all in one place. The layout has clear visual hierarchy for rules and indicators and what each action does, which sets it apart drastically.

Here’s where things start to get interesting. It’s no secret that Pluto has some tough competition out there, but that just tells us we’re working to solve a problem worth solving. Our solution from moment one has always been integration. In a total reversal of field from most modern aspiring fintech companies, we can’t see a future of Pluto without deep integration of these myriad features as one complete product. Others would be content to take any one of these features, give it a subscription price, and pass it onto users to call it a day. We see this lack of cohesion as a failure from the start, one we have circumvented entirely.

Indicators were Pluto’s first fully functioning feature less than 6 months ago, when our team was but a few people in a bedroom. To date, we’ve added full strategies, paper trading, the marketplace, and screeners to the list, and that’s just the broad strokes. If you remember Steve Jobs’ infamous iPhone reveal, you know what I’m getting at. In the current space, these features are all separate products, and they shouldn’t have to be. Forming a screener to implement into a strategy to list on the marketplace to sell to a new user is, without Pluto, an exercise in daisy chaining and compromise. No longer.

That’s a wrap for now! Stay tuned for a lot more content in the coming weeks, including an in-depth tutorial on how to get started using all these features in tandem, and much more from our social media team. We can’t wait to show you what else we have in store, and we hope you’ll check out this major feature for yourself!