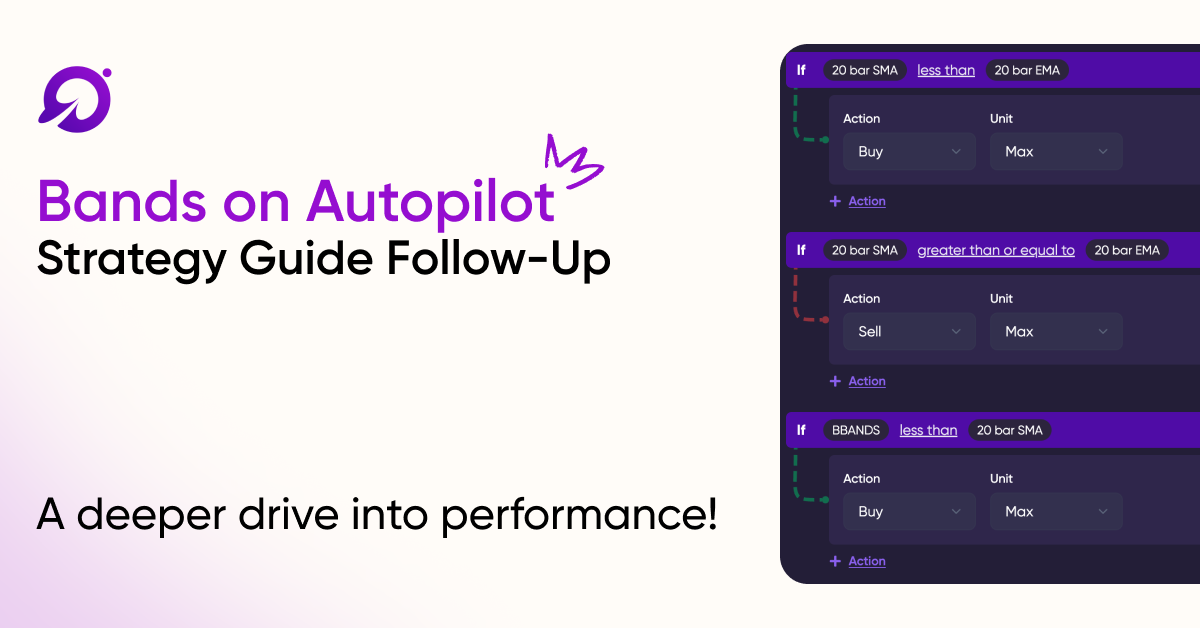 Bands on Autopilot Follow-up: Written as a response for Reddit

Wow, thank you to all of the people who gave me constructive feedback on my last post. Here are some of the main ideas people pointed out: Inclusion of long-term compiled data, what defines beating the market, and how trading fees effect the profits of the strategy. I have read through all of the comments and given some thought to these ideas and I will be addressing them in this post. Let's start off with a compilation of long-term data and defining what beating the market means. Also, for those unfamiliar, here is the strategy build in question:

For my last post, I compared the performance of "Bands on Autopilot" to the performance of the S&P500 during the bear market of 2008 and the bull market of 2021. I also compared the strategy to the assets it was executed on, AAPL, AMZN, MSFT, and GOOGL. During both of these periods my strategy outperformed the S&P500 and the assets I traded on. People pointed out that there was some level of overfitting here, so I decided to compile backtesting results from 2008-July 25th 2022. Here are the results:

During this period the strategy returned an incredible 350.86% while my benchmark (S&P500) returned 123.49%. The assets we traded on returned 395.95%. There are a few things to unpack here. Firstly, the risk undertaken by "Bands on Autopilot" was significantly lower than that of just holding these four stocks. Yes, I got outperformed by ~45% but my exposure to ~128% less potential losses has to be considered a win on some levels. Second, year over year this strategy was extremely consistent in terms of winning trades despite a lot of market volatility. This gives more certainty for the strategic outlook than just buying and holding. If the 4 assets I traded all lost money for the next 15 years, at least I know my strategy would consistently save me a ton of money during that period.

The next logical step is to test this strategy against some different assets. To select these assets I looked up the most popular stocks on reddit for 2022 (most of which probably came from wallstreetbets). Here are the top reddit stocks listed: TSLA, GME, AAPL, AMZN, AMD, WISH, TWTR, and AMC. I also decided to select five random stocks from five different sectors. The five stocks randomly selected were BA, CHTR, MCD, PG, and XOM. Here is a screenshot of my portfolio for the second round of testing:

During this period, "Bands on Autopilot" returned 357.98% while the benchmark returned 48.96%. The assets I traded on returned 439.73%. Compared to buying and holding the S&P500, this strategy absolutely rocks. However, buying and holding the assets in this portfolio would have yielded higher returns. These returns would come with a substantially higher risk potential of 455.02% compared to the strategies risk potential of 278.80%. Similar to the other breakdown, the percentage of overall winning trades was widely consistent. This consistency along with the risk mitigation shown instills confidence for future use of this strategy. It should be noted that in periods of heavy market losses, this strategy really shines. Anytime the S&P500 was negative on the year, the strategy was outperforming the assets it traded on by notable margins. It should also be noted that a large chunk of the asset performance came from the meme stock blow up.

Between both strategy breakdowns, the average trade return was typically somewhere between 0.05% and 0.20%. Due to many trading brokerages having fees for trading, scalping such low percentages would make this strategy unviable for long term use as you would lose more money from fees than you would make from the trades themselves. However, a brokerage that does not charge per trade, and only requires a set monthly payment for use would make this a possibility. For users who asked on the last post, slippage is accounted for within these backtests.

In conclusion, extended backtesting with multiple portfolio builds increased the frame of reference enough for me to identify the true strengths and weaknesses of this strategy. I am heading back to the drawing board to create a strategy that outperforms this one in more ways than one. Thank you to the users who respectfully critique these strategies builds and help myself and others improve. Peace! <3

Note: Bollinger bands have a standard deviation of 2 and this strategy is trading on the 1 hour time frame.